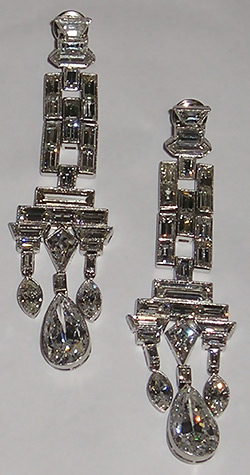 Diamonds were cut in shapes never before seen such as emerald cuts, pear shapes, and marquises. These blended will with the symmetrical nature of the jewelry. Perhaps the item of jewelry most recognizable in this period was the double-clip brooch. The two identical clips could be attached together and worn separately on the lapels or belts of dresses.

The central theme of Art Deco is the geometry and symmetry. Its boldness of both design and color had such universal applications. This is one of the fascinating aspects of the Art Deco movement. Designs that were characteristic of the earlier periods were generally an attempt to escape from the clutch of the industrial monster known as mass production. The Art Deco movement was an attempt to combine the harshness of mass production with the sensitivity of art and design.