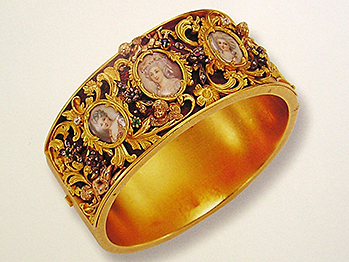 There were few restrictions in the design of Nouveau jewelry. The most common motifs incorporated life forms, orchids, lilies, irises, ferns, snakes, dragonflies, animal, and human forms. Along with the creative energy came a mastery of technique in casting and carving of gold as well as the extensive use of enameling as never seen before. Probably the single most important technique used by Art Nouveau designers was enameling. The type of enameling that is transparent with no backing. The effect most often achieved by Plique a’jour enameling is likened to that of stained glass. This effect gave Art Nouveau jewelry a distinctive appearance much like a three-dimensional painting.