Clarity is an indication of a diamond's purity. In all diamonds, except the most rare, tiny traces of minerals, gasses, or other elements were trapped inside during the crystallization process. These are called inclusions and may look like tiny crystals, clouds, or feathers. They are what make each diamond different and unique. Many of these inclusions are not visible to the naked eye. The clarity of a diamond is graded by how many, how big and how visible the inclusions are. The fewer and smaller the inclusions, the more rare and valuable the diamond. Less than 1% of all diamonds ever found have had no inclusions and can be called flawless (FL) or internally flawless (IF). 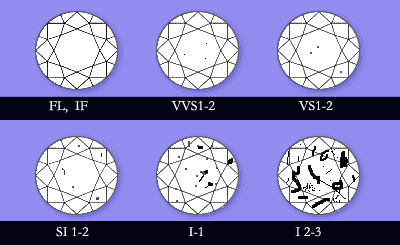 Since the late 1980's the clarity of a diamond can be enhanced through a process called "Fractured Filling". The method used to treat these breaks is very controversial. Internal breaks, (inclusions / flaws) can be hidden by chemically filling through laser drilled holes to improve the appearance. This most controversial gemstone treatment may also be accomplished by filling the surface reaching breaks of the diamond. Later those breaks may become visible when the jewelry item is repaired, sized, cleaned or heated. Many of these diamonds are reaching the consumer by unawareness and deception. By FTC law these "Chemically Enhanced" diamonds should be disclosed to the customer before the purchase. This is not always the case due to the salesperson's lack of knowledge, and in some cases is outright misrepresentation. The Gemological Institute of America will not do a diamond grading report (certificate) on a diamond that has been treated.

The U.S. Federal Trade Commission has established the jewelry industry's standards for diamond clarity based on 10-power magnification. A diamond is graded by its relative departure from "flawless", the complete absence of inclusions under 10x magnification. A totally flawless diamond is remarkably rare and is extremely valuable. Diamonds containing significant inclusions that could affect durability generally command a much lower price.

The term "certified diamond" is frequently used and is being misused. Any diamond can have "paper" documentation but does not guarantee it is credible. In order to make a sale, some diamonds are over-graded and misrepresented. They can be the cheapest when unqualified corroboration is given. Without "proper" Gem Trade Laboratory GIA documentation grading it may not be worth the paper upon which it is printed. The Gem Trade Laboratory Report by the Gemological Institute of America is the most widely recognized and respected "Gem Grading Report" in the world.